There’s a sort of general consensus / possible myth of why comics writing was so bad in the ’90s.

This is separate from why the comics market fell apart, that can be blamed pretty-much solely on the speculator bubble bursting, but there’s no reason in and of itself that that would have caused bad writing.

Part of the reason was that the books were being rushed out so quickly while the market was in a boom, but mostly it is allegedly blamed on the fact that the marketing departments actually got hold of creative control at the Big Two comics companies.

I’m not sure I totally buy that.

Because despite what people and the mass media may tell you, you do have to be fairly creative to be a marketer/advertiser/branding expert.

It takes vision and a finger that’s always on the pulse of the current demands of the entertainment-buying market.

Just rolls right off the tongue, doesn’t it?

Beyond the weird name, the story takes a fairly standard three-issue structure.

Most of the first issue, in fact, is just recapping what happened in Darkhawk Classic and Heart of the Hawk… which is okay I guess, but geez come on.

We’re 16-18 issues in at this point, and all we’ve got is a weirdly drawn-out origin that was capped off way too quickly and a slew of guest appearances.

And by slew, I mean a slew.

Of the first five Darkhawk story-arcs, The Peristrike Force is the only one to not prominently feature another Marvel hero.

There’s marketing, and then there’s just not having faith in your brand. 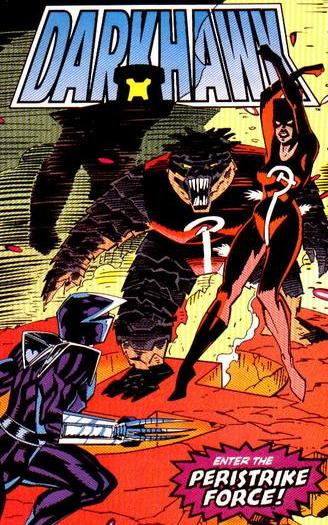 So apparently between arcs, Chris has taken a job at a radio station, a la Billy Batson.

That’s a positive shift if a very stereotypical one for a superhero comic.

The main thrust of this three-issue arc is a super villain group calling themselves the Peristrike Force — kind of a villainous Fantastic Four — taking control of Chris’s school along with a bunch of heavily weaponized mercenaries.

This has potential for tenseness, and they work that angle well, with Chris having to try and get back to his amulet as a regular teenager while the school is under siege.

Just like the way X-Men: Hard Promises was clearly written before 9/11 due to the ways it handled the idea of terrorism, it’s clear that this comic was written and published before the tragic trend of school shootings in the states really took off, starting with Columbine High.

It’s weird now, reading this today, to see a storyline where that is mirrored but not invoked.

Cultural shifts happen, and they do color readings, in the same way, nobody can really read Alice in Wonderland the same once they discover what Lewis Carol was all about.

In the end there’s not a lot to say about this arc.

For the first story to feature Darkhawk on his own completely, it’s only barely serviceable.

The ending though — with Darkhawk failing to stop the murder of one of the Force’s main targets — will have lasting effects on Chris’s psyche and his choices as a hero.

“For the first story to feature Darkhawk on his own completely, it’s only barely serviceable.”

How To Troubleshoot And Adjust The Idle On A Chainsaw

The Complete Guide to Social Media for Small Business

How to build a custom PC for gaming

Any cookies that may not be particularly necessary for the website to function and is used specifically to collect user personal data via analytics, ads, other embedded contents are termed as non-necessary cookies. It is mandatory to procure user consent prior to running these cookies on your website.